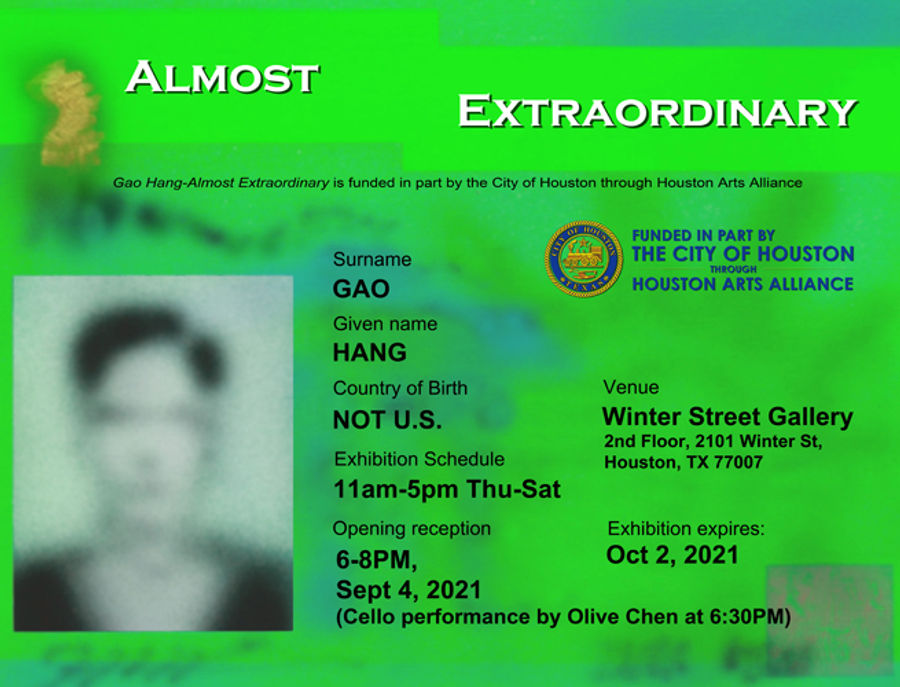 With his student visa soon expiring in 2018, Houston-based artist Gao Hang grappled with ways to remain in the United States amidst its ongoing political tensions with the artist’s home country, China. Unable to obtain employment sponsorship as a painter, he decided to apply for the O-1B visa, which permits individuals assessed to have “extraordinary ability” to work independently in the US. "Almost Extraordinary" illustrates Gao’s efforts to prove his merit to a system that inadequately evaluates the achievement and potential of emerging visual artists--an emotionally and financially draining process ultimately resulting in rejection. Through paintings and recent explorations into photography, found objects, and performance, Gao tells a story that is both self-reflective as well as resonant with many international artists trying to build their career in the US.

This exhibition is funded in part by the City of Houston through the Houston Arts Alliance. It is open to the public Thursday-Saturday, 11am-5pm, from September 5th to October 2nd.

About the artist:
Born in 1991 in Baoding, China, Gao Hang currently lives and works in Houston, TX. Gao moved to Houston in 2015 to attain an MFA in Painting from the University of Houston after obtaining a Bachelor of Art degree in Oil Painting from Capital Normal University in Beijing, China in 2013. His work has been exhibited in galleries and art museums across the globe including the US, UK, China, Netherlands, Spain, Germany, and Korea. Gao has also published an artist book, “Good Times Bad Times Give Me Some of That,” which gives a humorous insight into the struggles of immigrating to the United States. Hang was recently awarded the Artadia Houston Fellowship Award, Brooklyn, New York and Houston Arts Alliance - Artists and Creative Individuals Grant, Houston, Texas. He is represented by Anya Tish Gallery.